The people I meet & the cars they drive 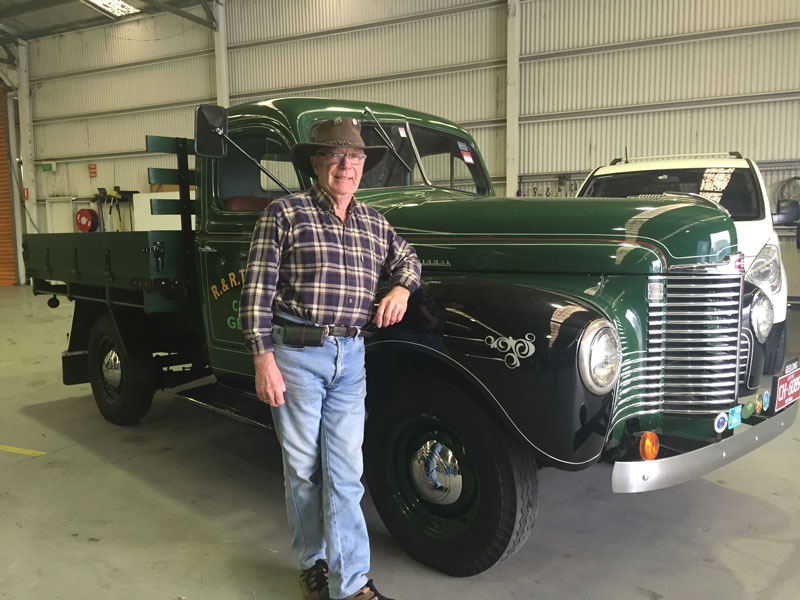 The Story of The Great Train Robber and The International Truck

I first met Bob Thompson when I was scouting for vehicles for the Mrs Biggs program – a movie about Ronald’s Biggs The Great Train Robbers’ wife’s perspective.  We needed a range of vehicles and Bob’s 1947 International truck fitted the bill and was one of the vehicle’s chosen for the film.

Because Bob and Max Action Vehicles have worked together continuously on movie shoots and commercials over the years, I thought he would make an interesting subject for my first Blog.  Ever obliging, we had a chat & I asked him about his love of trucks and historic vehicle restoration.

As it turns out, Bob’s father was a driver for Blakistons Transport in the 50’s.  Blakistons transport was an 1889 founded Geelong Company since bought out by K&S freighters.   Blakistons livery was green & black, hence Bobs choice of colour for the “Inter”.   Apparently Bob’s father was an awesome driver, but had a little mishap near Lara where he rolled his hay loaded truck.  Imagine the lack of safety features in a 1950’s truck!  Bobs father lived to tell the tale, but was relegated to the smaller International fleet after that mishap.

Bob has been a Fire Protection officer all his life.  (The apple does not fall far from the tree – Bob’s grandfather  was the first station keeper at Geelong West)  It was through Bobs work as a Fire Officer at Alcoa he met a colleague who was involved in the Western District Car Club.  This peaked Bob’s interest in old vehicles.  When the 1947 ”Inter” became available in 2000, partially restored, it ticked all the boxes – family history & a chance to satiate his interest in historic vehicles.    The truck has had a number of previous lives, as a wood delivery vehicle around Deans Marsh and as a farm truck near Winchelsea.  Bob says the ‘old inter” runs like a top & has featured in many rallies and events, the most arduous being the Bay to Birdwood in 2008.

Max Action Vehicles has featured this truck in many of the Cole’s Supermarket campaigns in the past 3 years.  Bob has become a bit of a stalwart – ever happy with the phone calls such as “Bob, its Deb from Max Action again – what are you doing next week?”  We look after his truck with kid gloves of course!

Now that Bob has retired he is involved with the Geelong Car Museum.  A very interesting bunch of blokes there – the subject of a future Blog me thinks…

If you or a friend has an interesting vehicle and would like to list it on the Film Vehicle data base.  Remember, there is no charge & no obligation to undertake any work!

The past and the present. Pop your car onto data base and you will have a better life. Guaranteed #maxactionvehicles #carsonfilm #benbangay #simonbarton ... See MoreSee Less

Lend us your red Van and becomes magical! Upload your car to our data base. It’s Free! Just go to our web site. #maxactionvehicles #carsonfilm ... See MoreSee Less

Looking for something like this GOLF. Would prefer something about 15 years old and not black or white. This is required for 4 seperate days in Feb around Mt Macedon. You will be paid well and your travel time covered. No stupid action! Prefer auto too. Ring us in the office for all the details. Thanks in advance! 0352743123. #MaxActionVehicles #carsonfilm ... See MoreSee Less